Home Is Starbucks Coffee Organic? (The Absolute Truth!)
EEating Out

Starbucks… One of the most frequented coffee providers for consumers in the world!

At any time of year, you will hear “meet me at Starbucks” or “I’m grabbing a coffee from Starbucks” at any breakfast, brunch, or lunchtime conversation. But is Starbucks coffee organic?

Well, no, not entirely. But Starbucks also does not claim to be wholly organic either, so there is no immediate scandal attached, and we will go into the hows and whys below.

With the coffee house being one of the most dominant on the high street, in shopping centres, and at service stations on seemingly every motorway, do we actually know why Starbucks is so well renowned for its caffeinated products?

And does it even matter whether the coffee we have from the retailer is organic or not?

So, we have said that Starbucks is not wholly organic.

We say ‘wholly’ as some elements of the caffeine chain are organic, such as some of the coffee beans they have for purchase to take away to make the best Starbucks coffee at home. 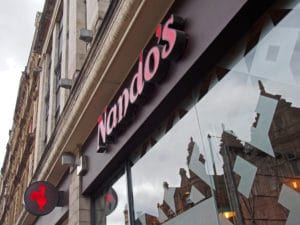 Starbucks has a vast chain of coffee houses that offer a wide variety of coffee (and non-coffee) based hot and cold beverages.

They are available to have in-house or to take away or indeed they even allow you to grab all the ingredients (including the cups!) to take home and re-create the Starbucks experience in the comfort of your own kitchen.

If you have ever seen a Starbucks coffee menu, you will totally understand the following explanation:

There is such huge variety on offer at every Starbucks branch all over the world. To be classed as organic, Starbucks would have to ensure every ingredient they use has organic certification, which is obviously a certification offered at the source of the raw products to declare that they were produced within organic standards.

So let’s break that down a bit more:

To be completely organic, Starbucks would have to make sure that EVERYTHING they use to make each cup of coffee was sourced where the natural products were produced within organic guidelines, including:

And everything else that they provide would have to be from an organic source.

A Case of Organic Vs Profit?

Starbucks has clearly come to a conclusion that sourcing everything with an organic stamp of approval may well affect the efficiency of the daily caffeine turnover of the chain. It would undoubtedly increase the price of the product to the consumer.

Not good news for the coffee consumer!

So, if Starbucks is not wholly organic, what makes them stand out in the coffee race?

Not far removed from organic standards, Starbucks motions that a very high majority of the coffee beans are ethically sourced, and Fair Trade certified.

Fair Trade is defined as “trade between companies in developed countries and producers in developing countries in which fair prices are paid to the producers.” and this is incredibly powerful when it comes to preparing a coffee that demands respect from the people who cultivated the bean.

The system of fair trade has been operational in the UK for over 25 years. It is an internationally recognised mark to certify that the source products of the coffee, chocolate, or even the demerara sugar have been obtained in a way that does not exploit the smallholding farmers who cultivate the raw product, which is an ethical way to do business.

As a vast conglomerate, Starbucks could quite easily command a lot of natural products from small farmers in South America, for instance, for a minimal price. Still, they push back against that notion and state themselves that:

“Our standard Espresso Roast served in all Starbucks stores in Europe, the Middle East and Africa and used in your Americano, Cappuccino or Latte as well as seasoned favourites such as Pumpkin Spice Latte, is 100% Fairtrade certified. We’ve been working with Fairtrade globally since 2000.”

Hats off to the coffee chain for recognising and protecting their small farmers, I say!

What Coffee Brands Are Organic?

While most high street chains will provide an organic blend of coffee or even prepare you an organic cup of coffee, like Pret a Manger, you will find that they can rarely declare that the whole cup of coffee is organic. In reference to trading descriptions, they simply don’t and can’t say it.

However, smaller independent cafes and coffee houses are likely to be able to sustain the organic coffee movement daily, with less variety in their options but more control over their products of choice and the way they prepare them.

They have the time and the continued target footfall of clientele to make a sufficient living out of using the status of “organic” as leverage for their profit, which is great news if that is what you are seeking!

Still, they cannot and do not declare their coffee organic simply because it is unsustainable for them as a giant chain to maintain that organic standard throughout every single option they offer.

It simply does not align with their business turnover.

However, most of the coffee at Starbucks is ethically sourced and 100% fair trade certified, which is excellent news if you are seeking to make sure your coffee has come from an ethical business arrangement that supports the small farmers at the source of your cup of take-out coffee.